Do you enjoy the popular game Cards Against Humanity, but actually do in fact find some of the cards to be just too horrible? Or maybe you've been wanting to create your own cards and can't stand that freshly Sharpied look? Or you're a big fan of of spending nights drinking martini's and browsing the Ladies Against Humanity site? Well look no further, the internet is here for you. The following page describes how to print out Ladies Against Humanity, you can take this system and apply it to your own custom set of text.

Ladies Against Humanity - Print at Home! 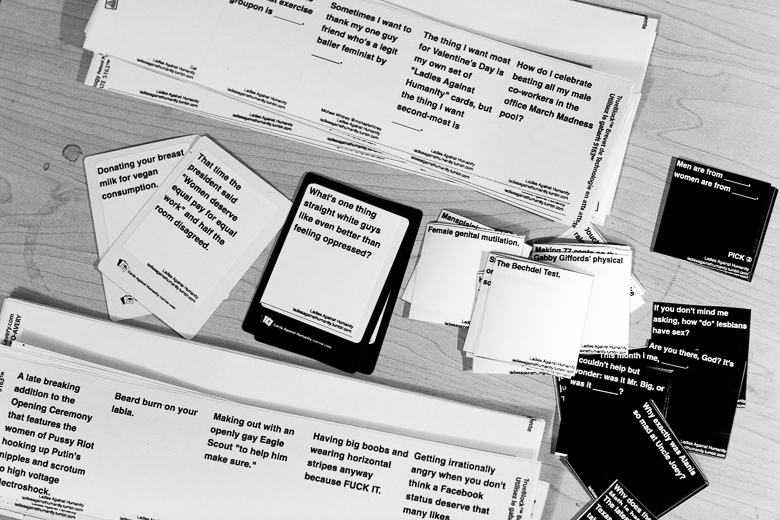 What are Cards Against Humanity?

Cards Against Humanity is a game for horrible people. The person who is It pulls a random madlib fill in the blank Black card and reads it out loud. The rest of the players respond by choosing an answer to fill the blank in with White card. The person who is it reads out the White cards and selects one as the most appropriate (and typically despicable) answer and magic things happen with points.

The original game is shared under a Creative Commons license and the makers even provide a way for you to print the cards at home, though just like any other print at home card game it's actually a pain in the ass to do it well. Card games aren't that expensive, and supporting your fellow game maker is a great way to give hippie hugs without actually touching other humans.

What are Ladies Against Humanity?

The contents of the original cards can be fairly ugly, sexist, racist, and a number of other things that would take forever to fill in. A short while ago some lovely people decided the game would be more entertaining for them if it included some feminist orientated cards with the same sort of "horrible" tone as the original set. And so Ladies Against Humanity was born. The blog features new and amazing cards in a similar format to the print out version of Cards Against Humanity and is updated constantly.

Why are these documents?

After playing a few times I decided that a good house rule is that if a player finds a card a bit too offensive they can throw it into a special "fuck off" pile where after review I'll most likely never put the card back into play again. These are still physically good cards. Add those along with all the blank cards that come with the base game and expansions, and some labels for a printer, and now you've got yourself the ability to make some new cards without needing to find a Sharpie. Complicated, yes?

I think many of the cards from Ladies Against Humanity would make a great addition to any deck, and so I wanted a way to actually add them to mine. Sadly the Tumblr isn't the most accessible thing, and so I've started to document the new cards as they come. This shared spreadsheet is here for others to enjoy the fruits of my labor if they want to do something similarly.

I did not write any of this source content and hopefully have done a good job at providing attribution and link back. I have gone through and added ending punctuation to all the cards to maintain some sort of consistency with the style of the original deck. It is entirely up to you if you want to print these out or to even read them, I am not forcing you to do either. If you have a problem with this or hate me for providing this spreadsheet it's your own damn fault, jerk.

Additionally it's up to you which ones of these you print out. I hate trivia games because I don't keep up with pop culture references, so many of these I most likely haven't printed out myself.

How the fuck do I print these?

There are two schools to owning Cards Against Humanity, you either own an officially printed deck, or printed at home a deck from the PDF provided on their site.

I own an official printed deck (and possibly a couple expansion packs)...

The original game along with expansions come with a lot of cards. Some of them in poor taste, or offensive, or both, and most likely there are a couple cards you completely don't find funny and actually honestly don't like. During games I have a "fuck off" discard pile, this is a special pile where cards placed in it by players (after a personal review) never actually go back into the playing deck. These are still physically good cards, and so I've started using sticker labels to re-use them with new text. Additionally if you have acquired any of the expansion packs or the bigger boxes you also have a bunch of blank cards. With all these forces combined, you've now got to figure out how to get the text from the Ladies Against Humanity site onto the cards.

The easy way of printing these out is to first get some blank 2"x4" white sticky labels, specifically "Avery 5163" are what you want. Please keep in mind the standard Avery branded ones are extremely sticky and will most likely destroy your cards if you try to peel them off, they're also thicker than most other labels.

The next step is to download the 5163 Labels - Black Cards and 5163 Labels - White Cards PDFs. Note that the black cards PDF isn't inverted in color, this is specifically because the official blank black cards have a white area to write in something new, and I wanted to match that, also I hate wasting toner. When printing out the black card labels make sure you know they're supposed to go onto the black cards and not to get them mixed up with the white cards.

I would recommend printing a few test pages out onto normal paper, lining it up with a sheet of labels and holding them up to a light to see if they all print in the right spots. After that print a way. There's a line under the attribution bits of the labels, you should cut on that line to make the labels fit properly.

These PDFs were created using gLabels for Linux (though I really need to get around to using something like kbarcode). If you wanted to be picky about which cards you want to print out, you can grab the gLabels file for the cards, and feed it a downloaded CSV of either sheet from the main spreadsheet. If you run an operating system that can run gLabels, you're totally smart enough to figure out the rest on your own. If you down currently have a Linux neck beard, there are dozens of apps out there for Mac and Windows that can turn content from a CSV into labels.

Google recently got going some sort of plugin system for Docs and Spreadsheets, and Avery has a plugin that allows you to fill in a label template with content from a spreadsheet. Sadly they don't have a template yet for 2"x4" labels. Wah wah.

If you're looking for more blank cards, the folks over at Crabs Adjust Humidity are apparently putting out an unofficial blank card expansion soon (and no, I'm not getting paid to plug them here).

I printed the freely shared PDF at home, because fuck the system...

In an act of awesomeness the folks at Cards Against Humanity released a free to print (but not sell) version of the game shared under the Creative Commons Attribution, Noncommercial, Sharealike 2.0 license. The cards are about 2 inches square and you can print them out through a normal printer. These cards however can't really be used all that well with an official printed deck (or expansions) due to the fact that from the back they absolutely don't look the same and will give away who placed down what, sort of. Or you could not give a shit, up to you.

Through gLabels I've smashed together a special layout that's about 2 inches square and spat out the Ladies Against Humanity cards all over that. Simply download the Home Printed - Black Cards and Home Printed - White Cards and print away. The text on the cards is a little smaller to accommodate the cards from Ladies Against Humanity which contain very long blocks of text, so long that even with the smaller font it still runs into things. If this is a problem, I am so sorry.

Again if you wanted to hand select which cards you want to print, just grab the gLabels file for the cards, and a CSV download of either sheet and do your thing.

I take zero credit for the awesome and hilarious content from Ladies Against Humanity. I am not that funny.

Cards Against Humanity is available under a Creative Commons BY-NC-SA 2.0 license. That means you can use and remix the game for free, but you can't sell it.

The Ladies Against Humanity site is listed under a Creative Commons BY-NC-SA 4.0 license. Again that means you can use and remix the game for free, but you can't sell it.

This document, the Ladies Against Humanity Spreadsheet, all content provided within, and other documents found within the folder the spreadsheet exists in on Google Drive, are listed under a Creative Commons BY-NC-SA 4.0 license. Again that means you can use and remix the game for free, but you can't sell it. Slacker.