At some point when I was deciding to acquire my Bike Friday, Reed got a little envious and ordered a custom built one for himself. We decided the right thing to do was to travel somewhere and tour for a bit after getting our bikes, together, holding hands, the whole way. Well it took about a year but we finally went somewhere. There is, as it turns out, a sanctioned and well kept bike trail linking Copenhagen to Berlin. About 80% - 90% of it keeps you on bike only trails or very extremely once an hour low traffic roads. You'll see a ton of beautiful country side, and it's for the most part flat (except for a day in Germany).

I flew to Copenhagen (my first time) on July 30th, still cracked out from my sleepless leg leading up to Iceland. Some time around 07:00 in the morning I got out of the airport and next to a metro stop started resembling my nifty folding bike, which I've now named The One Trick Pony. I have to say that this particular photo makes me all giddy, instant bike! 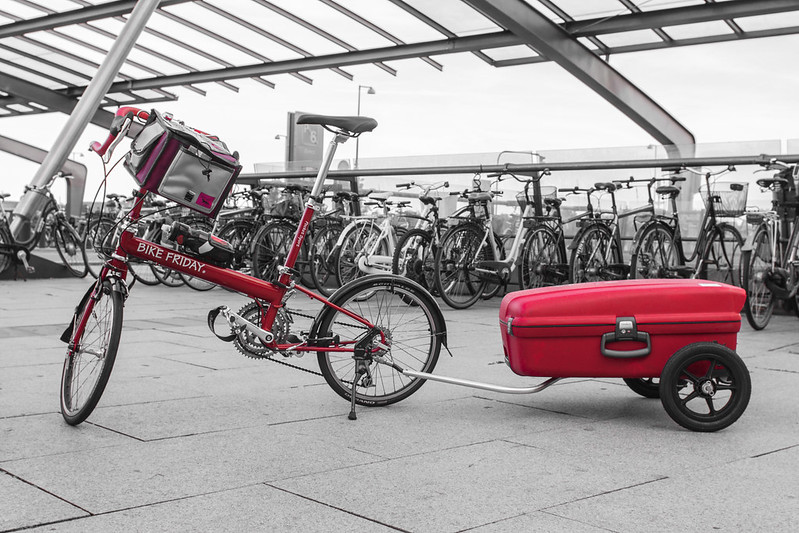 With no cell service and some precached up Google bike maps (glad I thought about that before getting onto the plane) I started to trek across the city toward my friend Mona Jensen's place. After a very slow ride and drawing a lot of stares towards my odd small wheeled bicycle with trailer thing, I eventually made it. We ended up spending much of the day cruising around the city, bought my first two of nine total SIM cards for this trip (the two ended up not actually supporting data and I couldn't even get them activated).

Later we made our way to Christiania. I got to meet her friend who was their public relations person, and got a fairly interesting tour of their mini city. For being a neighborhood of squats with some sort of tourism thing going, they had their shit pretty together. Also aside from a falafel, I had my best Danish vegan meal there, which wasn't all that great. While hanging out my friend Jens Hillerup, who being the awesome hacker that he is, had a spare data ready Danish SIM card (3/9), I think I still owe him some money for. Hello maps! 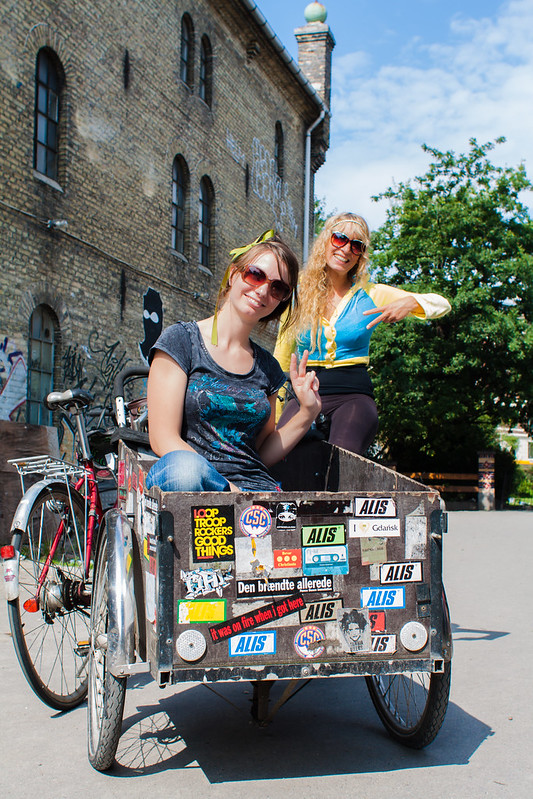 The next morning Mona rode with me to the Illutron barge. After waiting for a while Reed finally showed up from the airport on his silly folding bike too. We hanged out for a bit, Mona did a walk through of the barge (hacker space on water!) then ran around the city for a while. Went and checked out Labitat, Jens gave us a proper tour, I have to say they have a pretty neat lab there.

Later in the eve we met back up with Mona at the barge, had some sort of dinner thing, beers, and passed out. 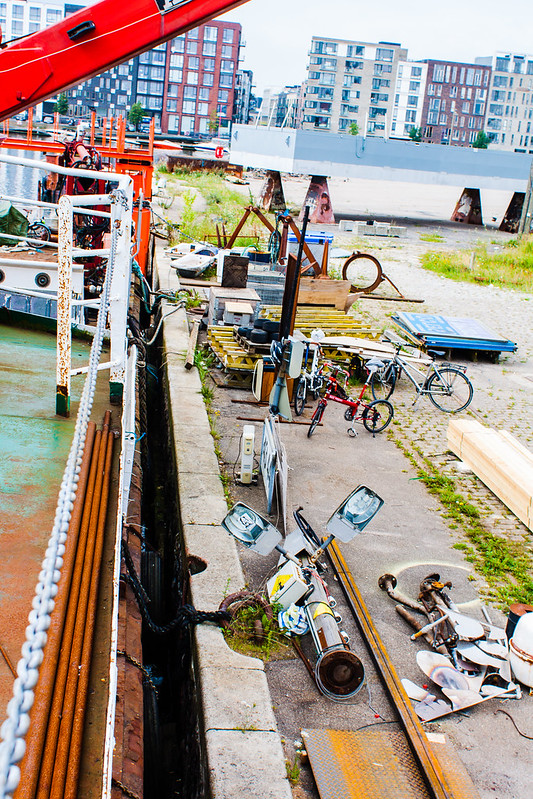 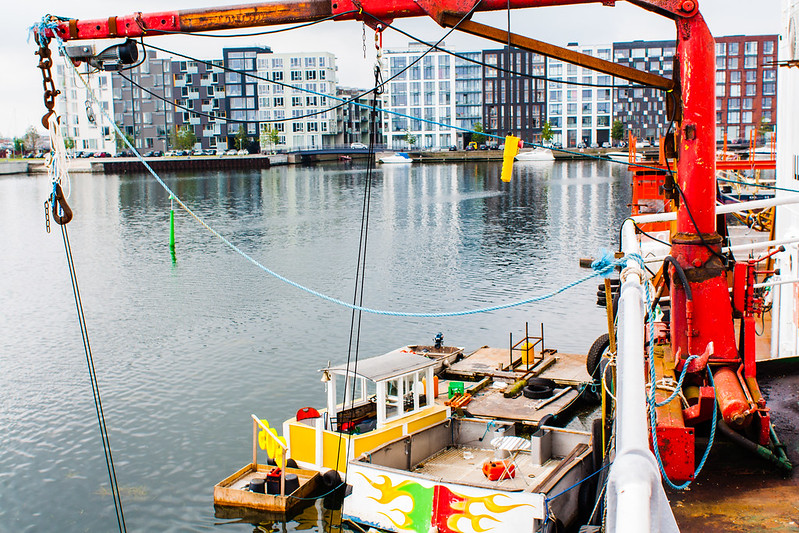 In the morning we showered (on the barge, but that's another story), saddled up, and head out of Copenhagen. We were really astonished by how friendly car drivers were to cyclists out there, even to the point of them simply getting out of our way. Additionally another constant theme was the fact that even though our bikes were weird, we tended to be the only ones riding the most functional for touring bikes, which I think I'll get into in another post. Reed eventually tried to make friends with some sheep. 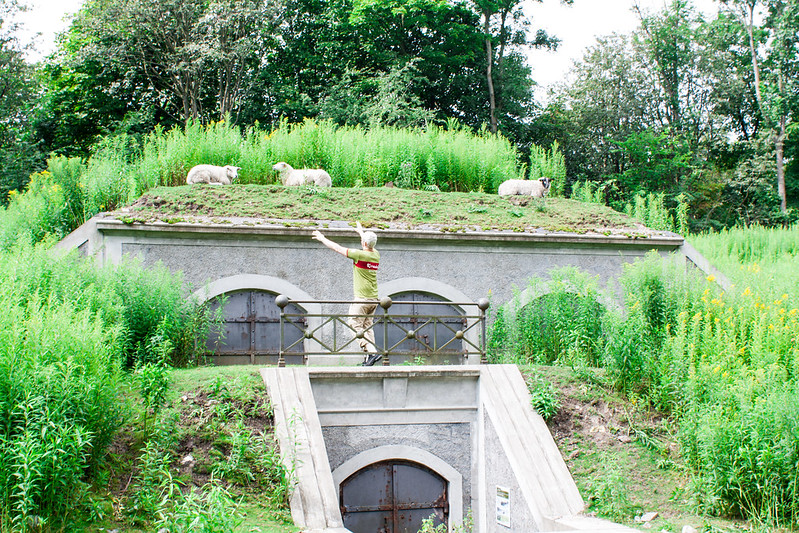 By the end of the first day we reached a place named Køge, which is pronounced [ˈkøːə] but don't hold me to that as I apparently never got it right. We kind of didn't have the greatest of experience in this city, it felt too much like Marin, and was even more expensive.

After some deliberation, a review of how much our enjoyment level was of the ride was here in Denmark so far, and paying for our overpriced hostel room, we decided it might be a smart idea to skip out on the majority of Denmark and high tail it to Germany. With getting some help from our state side Danish friend Rikke, we hopped onto a train the next morning (yelled at for boarding on first class) and got dropped off about 30 km out of a town named Gedser. While biking to the port there I found some high priced Danish Lärabars, a bag of dehydrated mulberries (which lasted me through the whole trip, so good), and at a garage sale a very odd t-shirt with the word Confusion written on it in hand writing I couldn't immediately read.

The ferry which was to take us over the Baltic Sea ended up being huge. We were essentially pedaling our tiny bikes inside this giant ship on an 8 lane highway next to the largest semi trucks I've ever seen in my life. The ferry took about an hour, during of which we were encouraged to roam around the 4 story mall on the thing, dine in three different restaurants, play in their arcade, get a pedicure, or shop in whatever their version of a high end department clothing store is. While eating some fries and reviewing our next half day of riding, I pulled out the two (3/9 and 4/9) German SIM cards that Astera sent me to see if we could get it running (which we weren't able to till we found some internet access). Our last views of Denmark were a vast ocean field of wind turbines.